150,000 Sign Petition to Honour a Hero from the French Siege

“We are brothers. It’s not a question of Jews, of Christians or of Muslims. We’re all in the same boat, we have to help each other to get out of this crisis.”
– Lassana Bathily 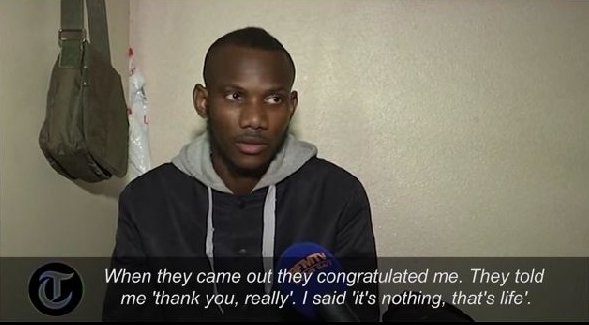 With everything going on in the world and with the spotlight on France at the moment, we came across this incredibly moving breakthrough we wanted to share with you. Yesterday we delved into how the principle of Personal Vision played out through both the atrocities carried out and how France as a nation has come together.

Today we are looking at how one man’s Personal Vision meant that he was able to save the lives of families facing near certain death in the ‘Supermarket Seige’. Why? Because there is an incredibly powerful lesson on Personal Vision that applies to our everyday life that comes from this tragic yet heroic situation…

*From The Telegraph – Abstract below

The quick-thinking Mr Bathily, 24, turned off the power so the customers, including a mother and her baby, would not risk hypothermia. Then he calmly escaped in a goods lift to give police crucial details of the store’s layout and where people were hiding.

Initially, the police thought he was an accomplice of the gunman. They handcuffed him and held him on the ground until they realised what Mr Bathily had done.

After the terrorist was killed in a dramatic shoot-out with police, grateful customers came out and shook Mr Bathily’s hand.”

Lassana, who arrived in the country at the age of 16 as an immigrant from West Africa, has been hailed a national hero. He is a Muslim shop assistant working in a Jewish supermarket

A Personal Vision Can Save Lives Or Take Them Away

In that moment, Lassana had a number of choices he could have taken. He could have panicked. He could have fought. He could have hid himself with no regard for others…he did what he did very simply because of his Personal Vision; his outlook on the world, his beliefs about what he was capable of, his compassion for others, his response to being under pressure, his level of foresight. This all came back to his view of himself, which was totally different to that of the hostage taker.

In that moment of intense pressure, Lassana was able to respond maturely and calmly in spite of the likely fear he may have been feeling.

He is an every day person who achieved amazing things through an application of principles, even if he didn’t know that was what he was doing.

He had no special training, he was just keeping his head down working in a market. Yet because of the response he chose in that moment, he not only saved lives, but has become a symbol of peace and unity for a nation with over 150,000 people signing a petition for him to be given the highest honour to a citizen in France.

Your Personal Vision affects every single choice you make. Every road you go down. Every person you help or don’t help. It’s how you think, feel, act and behave and it either happens automatically or you deliberately choose it.

Your Personal Vision is always in effect and you can change it, just like Lassana managed to do in that situation. To find out how, just get in touch…

Lassana Bathily Tells How He Hid Shoppers in the Basement Fridge…

Do you have any questions or comments on the story above and how the principles relate to your own life?